On April 1 2020, President Uhuru Kenyatta met two recovered patients of COVID-19 as the country rushes against time to slam the brakes on new infections.

Brenda Cherotich, a former Miss Tourism Kericho County and the first Kenyan patient, and Brian Orinda shared their experiences in hospital and the efforts by medical personnel to have them back on their feet again.

Kenyans breathed a sigh of relief, especially the health workers who are still battling tirelessly to save more lives, as international efforts continue to contain the disease.

The beauty queen, who competed in the 2018 Miss Tourism pageant, looked bubbly in a bright red blouse. Her smile belied the anxiety she suffered in her trying moments. Brenda is the reigning Miss Tourism Kenya Hospitality, from 2018 to 2020.

Brenda, previously known as ‘Patient One’ said she may have contracted the disease in London on her way from the US.

She recalled how medics at Mbagathi Hospital and Kenyatta National Hospital moved fast to place her in isolation once she arrived. This was a day after experiencing symptoms of the disease. The most common symptoms of coronavirus disease are fever, tiredness and dry cough.

At the time, the country was in the grip of anxiety as daily news filtered of how the virus had already arrived on the continent.

“I first went to the US on December 19. I believe I contracted the disease in London on my way back. As a patriotic Kenyan and citizen of Kenya, I presented myself at Mbagathi Hospital because when in the US I had read that the hospital has an isolation facility. The staff took me seriously. They gave me a mask the moment I told them I had gone through London.

“It was not an easy thing. The nurses were also anxious because I was the first patient. I also want to thank the cleaners who cleaned my room and chatted me up,” said Brenda, who was in quarantine for 23 days.

Her friend Brian said he got infected through contact with Brenda.

“I got the disease through contact with Brenda. Immediately her results were out, the authorities came for me. When I tested positive, they embarked on my treatment,” he said, even as he also urged other Kenyans to take the disease seriously.

“Most people upcountry still do not believe that coronavirus is real. Let them follow the government guidelines,” he said.

President Uhuru Kenyatta termed it a moment of pride and urged Kenyans to emulate the duo’s example.

“You are special because immediately you arrived and felt unwell, without being coerced or forced or pushed by your parents, you took it upon yourself to go to a hospital…I believe this is a moment of pride,” he told Brenda.

“We are celebrating despite the challenges that we are facing. As a result of your actions, you were able to limit your contact with other people and no single death can be attributed to your infection,” said the president.

The video conference was also attended by Health Cabinet Secretary Mutahi Kagwe and other senior ministry officials. Kagwe said Brenda and Brian had been cleared to rejoin their families.

“The president announced earlier today that Brenda and Brian had turned negative on two tests. They tested negative after being tested twice over a period of time, not on the same day. We are very pleased that they are now back home with their families,” Kagwe said.

The president, however, did not have kind words for leaders who ignored guidelines on social distancing, placing the lives of millions of Kenyans at risk.

“There are people in this country who are not ready to tell us their condition. Some of them are leaders who should have known better. If we can follow Brenda and Brian’s example, we can contain this disease and treat it,” said Uhuru, who also thanked medical staff for their continued work.

“I want to thank all the medical staff for your work. You work is appreciated,” he said.

Kenya’s first case was reported on March 13, but since then, the numbers have spiralled. Last week, the government announced a night curfew in the most radical step so far to enforce social distancing.

The country has recorded 81 COVID-19 cases after the Health CS announced 22 new cases yesterday. One patient, a 66-year-old who died while undergoing treatment, was diabetic.

The president took the opportunity to apologise for police brutality meted out to members of the public on the first day of the 7 pm to 5 am curfew. He warned that the county could take further measures if the situation does not improve.

“When we introduced the measures, there were challenges and I want to apologies to Kenyans for the excesses that happened...We may put in place further measures as the circumstances unfold. But let us understand that these measures are aimed at protecting lives and keeping Kenyans safe,” he said.

Brenda and Brian will meet the president at State House.

“I want to meet them personally, not through video,” said Uhuru.

I pay over Sh1.2 million in taxes per container, Jux on African Boy merchandise 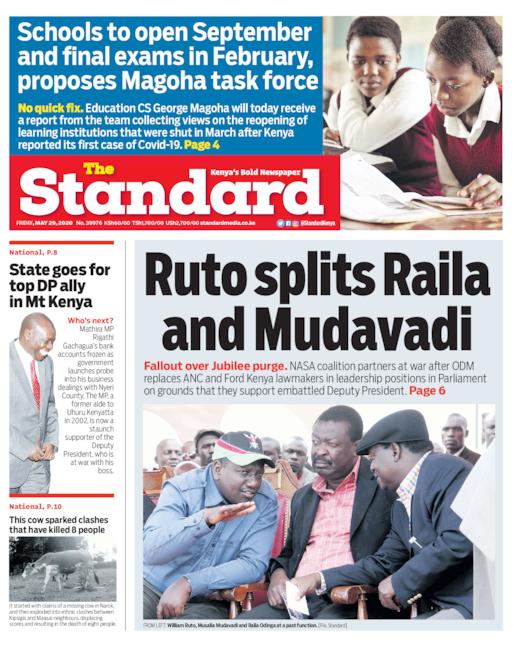